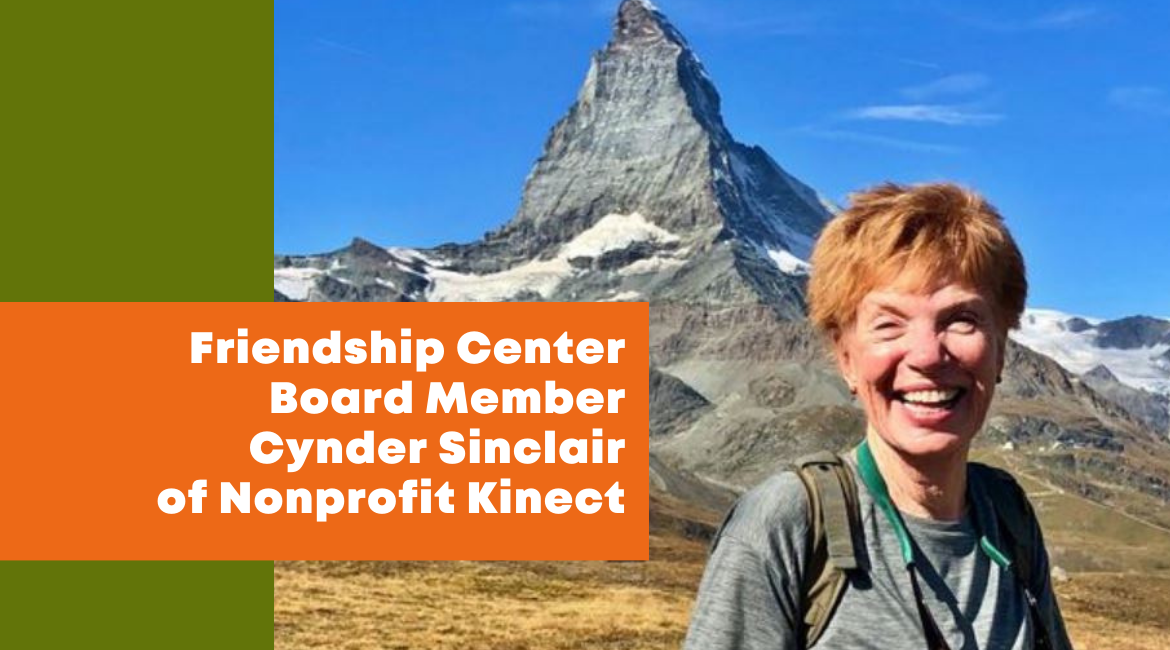 It all started with a small thing in the early 1970s when Cynder Sinclair was helping in her son’s classroom. “I noticed some of the kids were not dressed warmly enough for the weather,” she says.

Cynder was living with her husband and five children in the small farming community of Kingsburg, where it gets cold in the off season and the migrant workers don’t get paid.

Because she’s fluent in Spanish, her son’s teacher assigned Cynder to tutor the farmworkers’ children.

Some of us see a problem and feel bad. We might talk to friends or post on social media. Others get busy and fix it. Cynder, chief executive of Nonprofit Kinect and Friendship Center board member is by nature firmly planted in the latter group.

Kids need coats? “I thought I could use my daughter’s Tri Hi Y Club, and one thing led to another.” Together with the volunteers she recruited, Cynder filled a garage with donated clothing for the migrant worker families to take home free of charge.

“What impresses me most about Cynder is that she walks the walk,” says Friendship Center Chief Executive Heidi Holly. “As a connector, she’s able to talk the talk, getting the right people together.”

Making People Part of the Solution
At the Kingsburg clothing drive, Cynder hadn’t anticipated her customers being shy and uncomfortable. “As they drove up, the men were hunched down in the driver’s seats,” she says. “They seemed embarrassed. I realized they’d have to be a partner in this solution. They needed to feel they were contributing.”

The solution was to create a thrift shop with prices low enough to enable people to pay for their clothing. “It was nice that I was giving them clothing,” she explains. “But I realized it didn’t reaffirm their dignity. ”

Fixing an immediate problem is one thing. Creating a self-sustaining solution is another, which is where talking the talk comes in.

Food Shortage Was Immediate Problem
The Thrift Store worked well, but the trickier more immediate problem was that of hunger. Because the farmworkers were not paid, they were surviving mostly on the squash they could grow near the small shacks they lived in on the farms. “I thought, ‘How do you charge people for food when they have no money?’”

So she went to the farmers who employed the workers, brainstorming with them about both the need for food and the need to allow people to feed their families in a way that reaffirmed their self-worth. “The farmers agreed to provide rice and beans,” she says. “I went to the workers and told them the food was part of their salary.”

She didn’t know it then, but this was her first step in building the Kingsburg Community Assistance Program, Inc., which grew to consist of a thrift store, food bank, pre-school and a church. In 1990 KCAPS was awarded the first place Mustard Seed Award, a national prize organized by a division of World Vision to recognize organizations with the most innovative work for the poor.

Go to the people. Live with them. Learn from them.
Love them. Start with what they know.
Build with what they have.
But with the best leaders,
When the work is done, the task
Accomplished, the people will say
‘We have done this ourselves.’

Lao Tze is the Chinese philosopher who wrote the Tao de Ching, but Cynder openly credits her then-burgeoning Christian faith for giving her the persistence to not just help, but to help in a meaningful, sustained way.

“I said to myself, I’m a Christian, right? I wonder what that means? Reading the Bible, I noticed ‘the poor, the poor, everywhere the poor.’ I thought, ‘What can I do about that?’ That question happened simultaneously with my noticing the kids didn’t have anything.”

During her years in Kingsburg building her first nonprofit, Cynder’s work was strictly volunteer; her husband was a successful insurance broker who didn’t want her earning money. “My husband wouldn’t hear of it,” she says. “And I had a lot of kids to raise.”

Then one day her husband came home and told her they had to sell the comfortable home they’d been living in, along with everything in it. Things with her husband went from bad to worse until she knew she would have to leave him. (Later, there would be an FBI investigation, but you’ll have to read the book for more details.)

“I’m an Executive Director”
Cynder soon realized she needed to find a job. “I was 40-something and this would be the first job I held to support myself,” she says. “I thought, gosh, what am I? What do I call myself?”

Looking back on her work with KCAPS, she thought, “I’m an executive director.” So that’s what she put in her resume. “I interviewed as executive director of the Child Abuse Council in Stockton,” she says. “I let them just assume I got paid.”

And that was how Cynder landed her first paying job.

A two-year stint at Santa Barbara Bank & Trust where she created The Nonprofit Initiative, which facilitates relationships between businesses and nonprofit organizations, has been her only foray into the for-profit world.

But nonprofits are her roots. “I suppose it’s human services. Because as I went from nonprofit to nonprofit, I was doing everything from soup to nuts. The common thread has always been leadership management.”

“Her awareness of how to lead in the nonprofit sector, her enthusiasm and passion, coupled with her life experiences contributes to her being an excellent leader” says Heidi.

Do What You Can
Cynder doesn’t expect everyone to be like her. But she wants everyone to work toward a solution however they can.

“It’s just so important that each one of us gives what we have,” she says. “Whether it’s our time, expertise, financial donations, our moral support—whatever it might be—that everybody gives what they can and the result is always going to be better than it would be by itself.”