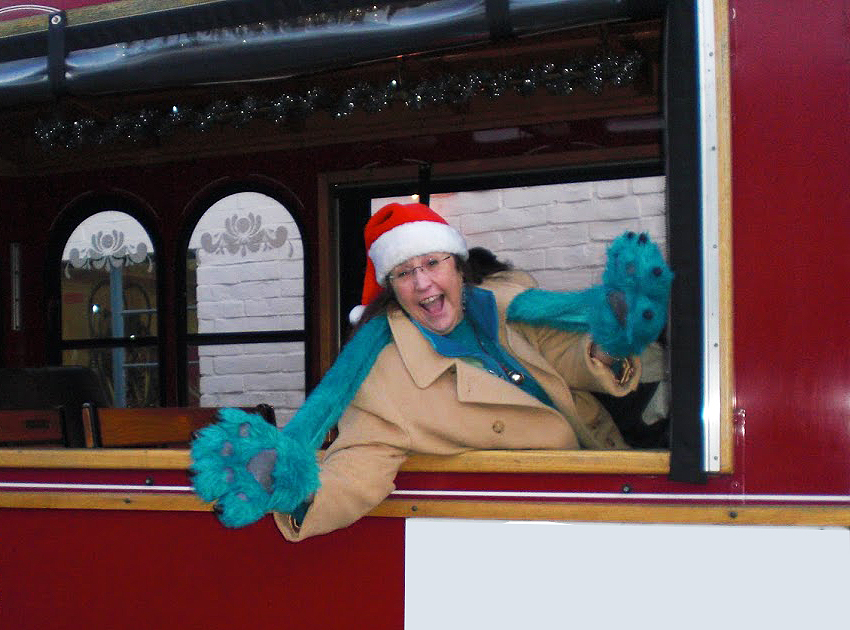 Every Place Needs an Esther Kratz

A few years back, Friendship Center threw an Oktoberfest, bringing together members from both the Goleta and Santa Barbara sites. The event included a feast, dancing and best of all, the nostalgic tunes of a big band orchestra.

“Events like these take a lot of planning,” says Kathryn Cherkas, Santa Barbara program manager. “The food, four vans to get the Goleta members out to Montecito. Everyone was involved.”

When the day arrived, in came the food, in came members from Goleta to Montecito in four vans, one driven by Esther, a 28-year veteran of Friendship Center who does a bit of everything. And then came the musician, in the form of a single, rather diminutive lederhosen-clad accordion player. Kathryn remembers the disappointment. “It wasn’t a big band.”

That’s why every place needs an Esther Kratz. No big band? No big deal. The minute the accordion player began, Esther grabbed the nearest person and began dancing like this was the idea all along. “She was planning for a big band,” says Kathryn. “And she was going to treat it like a big bang. Nothing rattles her. Nothing throws her. She’s very adaptable. Oktoberfest turned out to be a great day.”

Making sure the members are having a good time is Esther’s mission. “If you can make a difference in somebody’s life—make the world a little better everyday—that’s what you’re here for,” explains Esther, who shows up ready in colorful dresses, bows, ribbons and props of all sorts. That’s everyday. “We don’t know what tomorrow will bring. I do treat this like a mission.”

Esther credits the values she learned growing up. “I’m a minister’s daughter,” she says. (Esther’s father was the Reverend Paul Gammons who presided over El Montecito Presbyterian Church for 46 years.) “That came with working with small children and animals. I’ve always done well with children and the elderly. And you know, it can be challenging sometimes, but I always come away with something, a feeling like they’ve given me more than I’ve given them.”

Challenges and accordion players aside, Esther focuses on maintaining the dignity and grace of each and every member. She makes it her business to learn everything she can to make that possible. “If a member coughs in the other room, Esther can tell you not just who it is, but which hospital they were born in, what they did for a living and what their hobbies are,” jokes Kathryn.

“I look through their eyes to see what’s making sense to them,” explains Esther. “It’s not an exact science because every person is different; the idea is to have fun and enjoy life. That’s every aspect of what we’ve built at Friendship Center. Our members have changed, but these people are the troopers who’ve lived through such times. We get the joy of seeing them and treasuring them for who they are right now.”

Esther still thinks about one of the first people she met at Friendship Center, a gentleman with Alzheimer’s disease, who helped define how she feels about her work, even now. “He always had a smile,” she says. “He liked to give people directions to places, but the directions were frequently wrong. One day he came up to me and said, ‘Some of the finest missing people in the world are here.’ I think we all get to Friendship Center one way or another. You find parts of yourself and your life that you didn’t even know existed. Parts that make you resilient.”

You can help Esther and all of us providing this urgently needed care during Covid-19 by visiting our Festival of Hearts  virtual fundraiser January 25-February 6. Bid early, bid often! Festival of Hearts raises money to help low-income seniors participate in all programs Friendship Center offers.