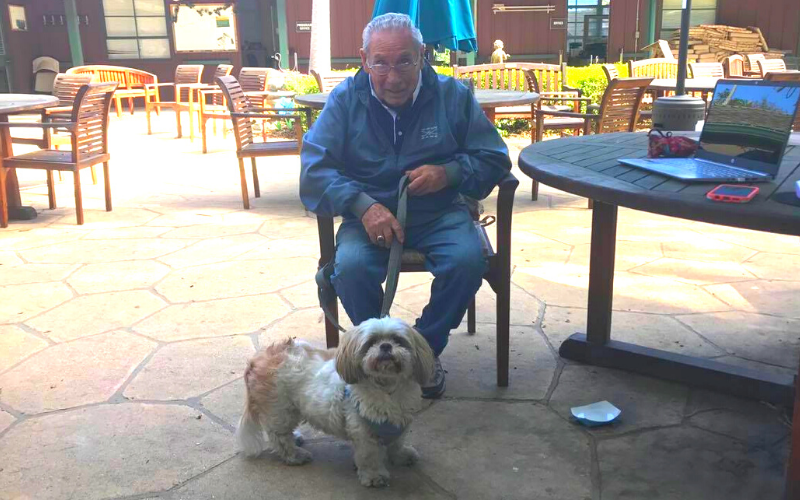 Everyone calls Robert Antonini “Sir Robert,” a moniker he gave himself. “It’s because I’m above and beyond the ordinary,” he jokes, but his self-deprecating manner suggests he doesn’t really believe that. Yet it’s true. At 94, Sir Robert is fit, sharp and always quick with a witty retort. Someone says, “You made up the name and it stuck. That means something!” His deadpan response: “It means you’re stuck with it.”

Robert Antonini grew up in Cleveland to an Italian immigrant family, one of six children. His father was a musician who taught all of his kids to play an instrument. Sir Robert’s instrument growing up was the saxophone. “I played for a short while,” he says.  “But I wasn’t very good.” Of his mother, who lived to 103, Sir Robert says, “My mother was special. She was good all the way around. She cooked, she cleaned, she took care of six kids.”

Like many of his generation, Sir Robert was drafted into the Army during WWII while still in high school and shipped off to the Philippines. After his two-year stint in the service, he moved to Los Angeles and studied acting and dancing. While his Hollywood career never quite got off the ground, (“I was too short”) he is still the one you want around when music is playing.

“Sir Robert loves to dance,” says Kim Larsen, Family Services manager. “Before the pandemic, we had our live bands coming once a month. Robert was the first one to get up and dance with anyone, sweeping them around the courtyard.”

Hollywood career or no, there was a measure of old Hollywood glamor during his time spent as roadie with the Ray Anthony Orchestra, which recorded with Frank Sinatra among other greats. Ray, having changed his surname from Antonini, is Sir Robert’s older brother. “You couldn’t go by Antonini and have a dance band in them days,” notes Sir Robert. “Any foreign-sounding name was no good.” (At 99, Ray Anthony is the last living member of the Glenn Miller Orchestra.) Brother Leo Anthony played sax in the Ray Anthony Orchestra. Of that time he quips, “Well, it wasn’t what you’d call working!”

Good memories? “When you’re young you have good memories of being young no matter what you’re doing,” he says. “That wasn’t glamorous to me. It was different, but I wasn’t a phony worrying about the people I met.”

He did meet both Marylin Monroe and Frank Sinatra, however. “My brother had a Marilyn party at his house in Beverly Hills,” he says. “He had steps coming from the street. She came down those steps and you knew when she had arrived even if you weren’t looking.” Another time, in Las Vegas, Frank Sinatra was in the audience and joined the band on stage for a song.

These days, Sir Robert’s main companion is his friendly shih tzu Dolly, for whom he cooks (and sneaks generous slabs of turkey from his sandwich during a recent picnic). Summing up his long life’s philosophy he says, “I don’t take things too seriously. I take it as the day comes. I’m not thinking of dying. First you gotta think of living.”